The footprint of our charting module is small thanks to highly-optimized C++ code. It uses very little RAM and CPU, allowing you to use all 24 of your monitors. 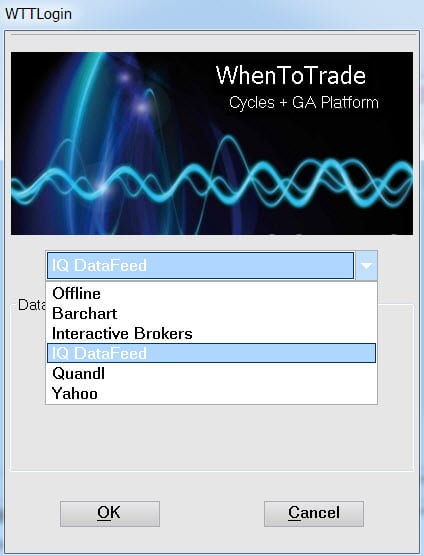 Our DataStream technoloy allows to wrap around any existing charting application and use the existing charts in realtime-push in WhenToTrade Charting. The feature simulates a realtime datafeed in WTT from any third party application. Scripts and interfaces for NinjaTrader and MetaTrader are included right out of the box. No need to subscribe to new datafeeds – just use your favorite charting application – just push the charts to WTT to apply our tools and update in realtime, including intra-bar updates. 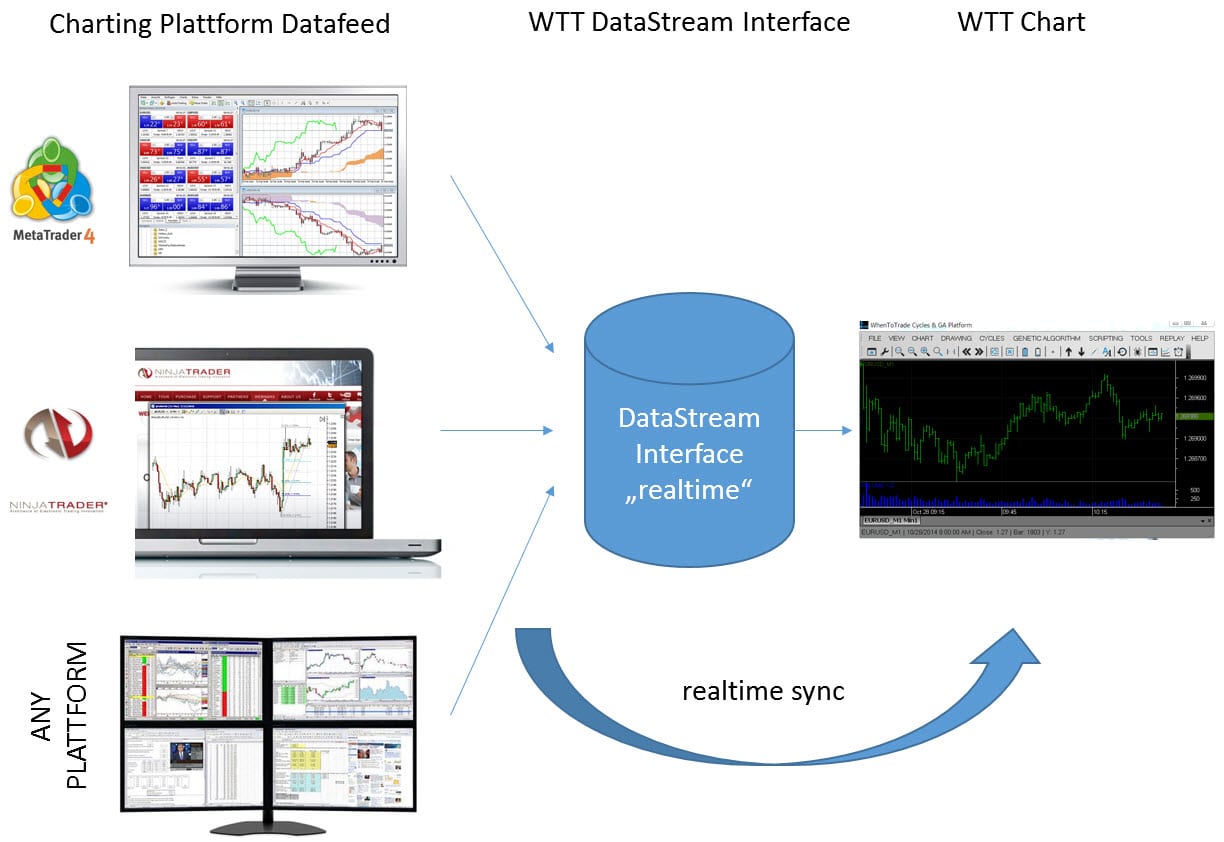 Background:
The assumption that cycles are static over time is misleading for trading purposes. Dominant Cycles morph over time because of the nature of inner parameters of length and phase. Active Dominant Cycles do not abruptly jump from one length (e.g., 50) to another (e.g., 120). Typically, one dominant cycle will remain active for a longer period and vary around the core parameters.

The “mapping feature” offer the ability to analyse detected cycles across different markets just with a mouse click. For example, detected cycles in volatility indices can be mapped directly to the underlying main index to verify if the cycle is valid for price movements.

No need to code any indicators on your own. Just attach the “cycle mapping” tool to analyse cycles from different markets on different datasets. It is also possible to map cycles inter-timeframe. For example: monitor x. k volume cycles of the eMini futures and map these signals to a 1min. emini futures price chart for trading.  Or check cycles in sentiment data like stocktwitts or PsychSignals and map these cycles to underlying price indices. Or watch cycles on the Dollar Index and research these cycles on EURUSD pair. 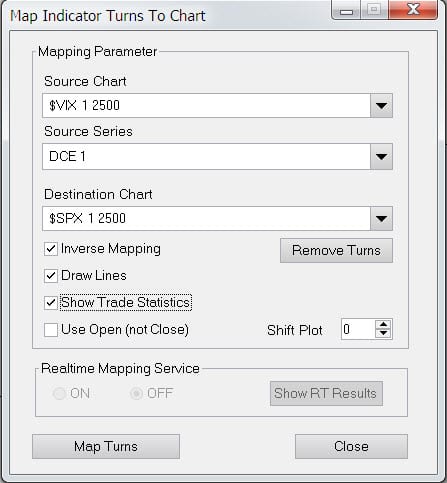 The mapping functions shows all trade statistics that correlate to the identified cycle mapped to the relevant price index.

Inter-market and inter-chart cycle research with full trade statistics was never more easy with this function.

It engine is not only bio-inspired, but it is bio-identical in many aspects. It simulates every natural process from mate selection to DNA packaging and complete meiosis. Most standard genetic algorithms neglect to perform the multiple steps of meiosis that are vitally important to genetic variation, a crucially important variable in avoiding local optima.

The possibility to combine our genetic algorithm module with the cycle toolset and our C# scripting module gives you full flexibility. On top of that, we allow to code your individual fitness function based on different criteria.

Think about to let the GA module check the parameter combinations you need for your individual C# trade system logic on any chart. Or simply code your own indicators in C# to be plotted on the chart. The inherent benefits of using a real programming language include: portability, unlimited educational resources and extensibility. Endless possibilities. 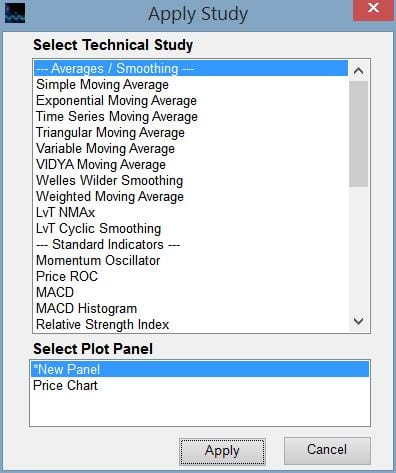 It is possible to use the values of one indicator as inputs for new indicators. Without the need to code any line, this can be done just with the mouse button. Add your indicators and use applied indicators as input for the next new indicator.

Endless possibilities without any need to code even one line.

Our “Market Replay” feature allows to replay chart market data bar-by-bar at any time and at any speed. It is the same idea as recording your favorite TV show during the day and watching it at some other more convenient time. Unlike most products that only allow you to replay one chart at a time, WhenToTrade provides a synchronous replay of two synced charts as if it was happening in real-time. You can view indicators in simulation against this data at varying levels of replay speed. 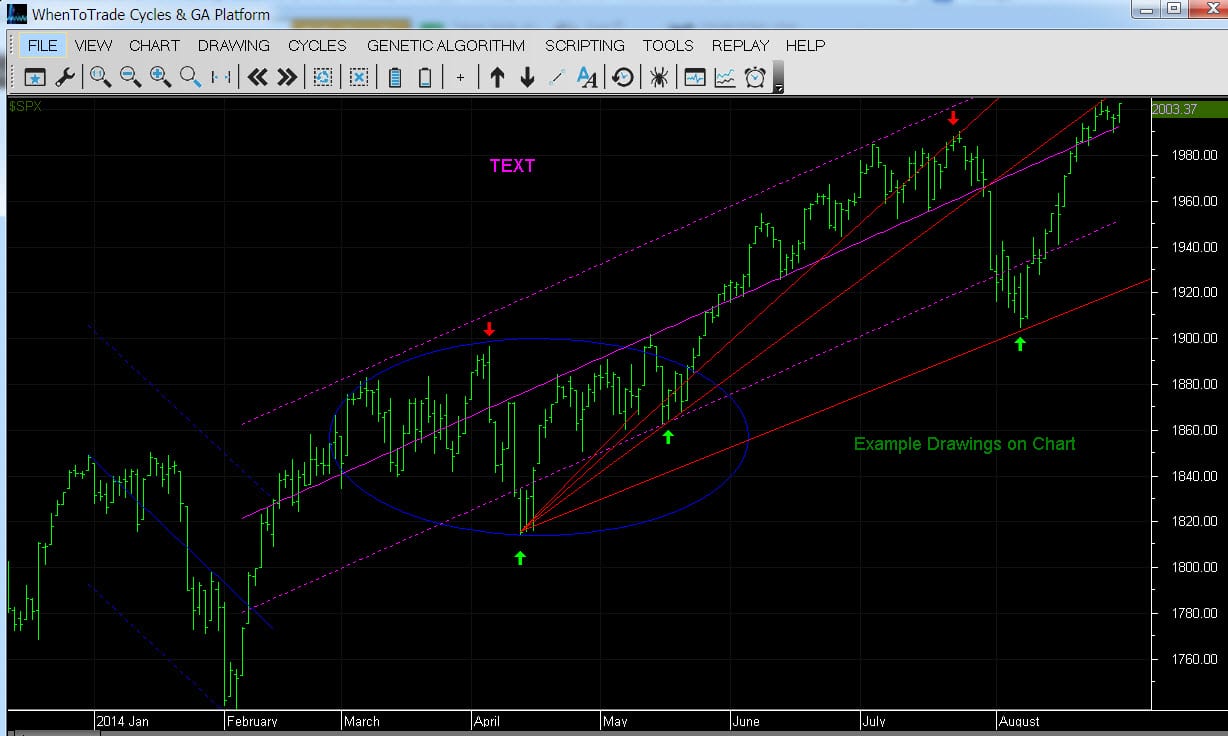 Our WTT scripting engine core is based on “TradeScript”, a powerful new programming language which allows traders to design trading systems without prior programming experience.

TradeScript, as a language, is intended for traders who need to write their own trading strategies but don’t know how to program in low-level languages such as C and C++. TradeScript allows traders develop trading systems quickly and effortlessly. It’s as easy as 1-2-3.

With TradeScript, you can enable your trading application to run scripts which provide alerts when the price of a security (stock, futures, or forex) reaches a new high, crosses over a moving average, or drops a set percentage, though those are only a few examples. TradeScript can also scan the market, generate trade signals, back-test trading strategies, and much more.

Most popular trading applications such as MetaStock, TradeStation, NinjaTrader, MetaTrader and others provide their own programming languages (such as MQL4, MQL5, EasyLanguage, MetaStock’s scripting language, etc.). Without a programming language, traders are unable to develop automated trading systems or perform back-testing of strategies.

A vector programming language offers extreme flexibility with a minimal learning curve. In fact, in just five minutes, you can start writing with TradeScript.

So what is a vector programming language, and why is it so easy to learn?

Vector programming languages (also known as array or multidimensional languages) generalize operations on scalars to apply transparently to vectors, matrices, and higher dimensional arrays. The idea behind vector programming is that operations apply at once to an entire set of values (a vector or field). This allows you to think and operate on whole aggregates of data, without resorting to explicit loops of individual scalar operations.
In other words, it’s similar to the macro language found in Excel.
The easiest programming language for traders. The most powerful, too.

An example: to calculate a simple moving average based on the median price of a security over 30 days, in a traditional programming language such as BASIC, you would be required to write a program similar to the code shown in this block of code.

Several lines of code would be required to create the “MedianAverages” vector. But with TradeScript, you can accomplish the same thing using only one line of code as show below.

And now MedianAverage becomes a new vector which contains the 30-period simple moving average of the median price of the security.

It is not uncommon to find array programming language “one-liners” that require more than a couple of pages of BASIC, Java, or C++ code. The same holds true for creating trading systems for back testing and trade alerts.

TradeScript was originally designed as a high-performance programming language for high-frequency traders. It was designed to scan over 100,000 stocks based on complex technical criteria and return instantaneious results- in under five milliseconds. That was years ago. Today it is even faster.

We here at WTT took the TradeScript core and extended the fundamental engine to align it with our cycles and genetic algorithm knowledge. Today the WTT TradeScript Version offers an easy way to start coding trading systems, individual indicators or alerts. Our individual tradescript language offers already pre-build scripts.

It can be used in combination with our C# Scripting engine. 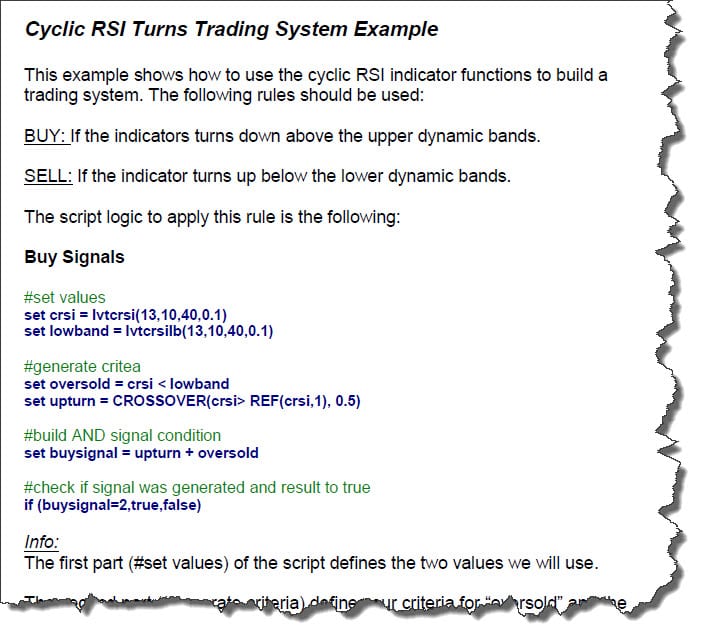 Backtesting is an essential tool to see if a strategy works or not. Our Backtesting module simulates your entry and exit scripts on historical data and provides a backtesting report, which allows you to conduct proper trading system analysis. 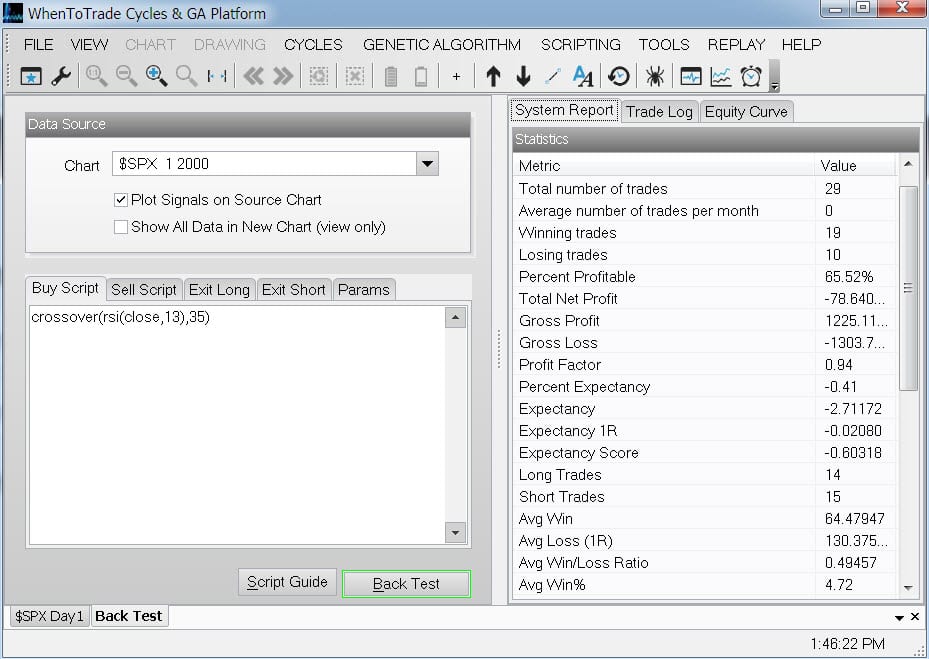 Any current data on the chart, including indicators, can be pushed to an Excel sheet. This service allows you to push the current status of all data from the current bar into your individual Excel spreadsheet. The data will be kept updated in realtime on your excel sheet via the integrated WTT push service.
So you can monitor thousend of parameters that flow from your charts into your calcuation sheets. For example you can setup a dashboard in Excel to monitor the current status of special indicators for one symbol on different timeframes. You can add color coding.

This feature allows you to setup individual dashboards in Excel on the fly that give you another view on the market. All data is kept up-to-date via the WTT Excel realtime-push service. 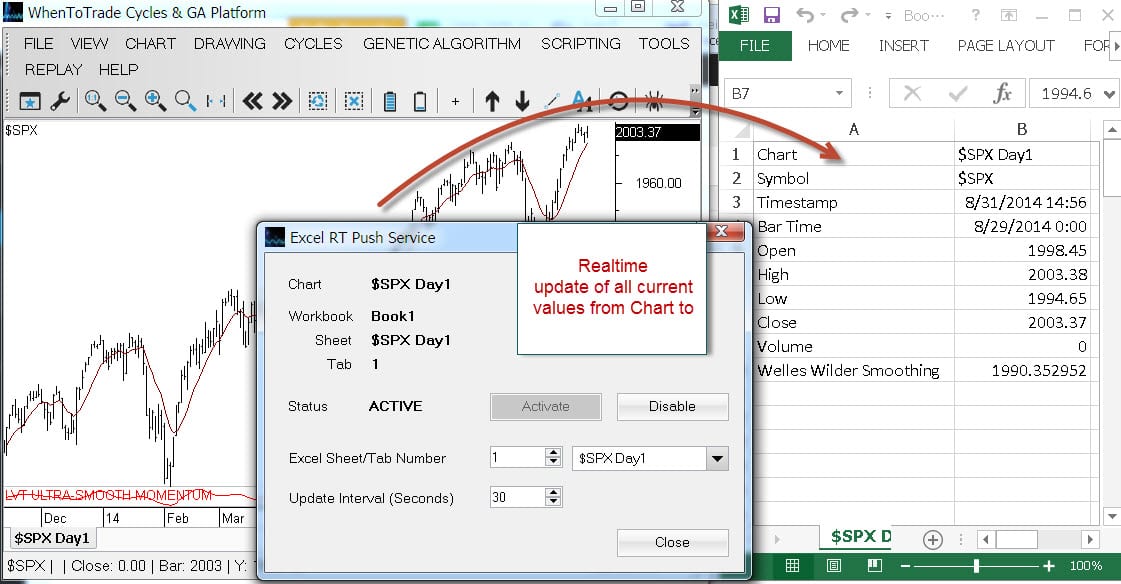 In our “western thinking” and “left-brained” world, we always use the linear concept of time. It has become so “normal” in today’s world that no one questions it. However, awareness of the consequences can have a tremendous impact when building technical indicators and trading systems.

Today and in every charting application, technical analysis is placed in the logic of linear time.

All non-linear features are explained in our 2nd Book with generic pseudo code! Please watch the following presentation on the power of non-linear indicators, Metonic Cycles and how to build them.